For a number of years I have been telling myself I want to do more gaming (as in RPG gaming) and more writing. To make things easier, I thought I would try to make the two run together. Of course, I've participated in the last four NaNoWriMos (winning the last two), but precious little gaming and no writing outside of NaNo. There's an expression about good intentions that I think applies here. Over the years I've had a couple of good ideas for a setting for this stuff but other than a few notes on various bits of paper, nothing much has happened. I even considered expanding the setting of my 2008 NaNoNovel and I didn't even like it all that much! 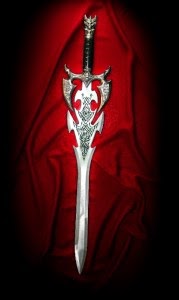 Now, I am actually going to do something concrete. You read it here, so it must be true. It's a self-fulfilling prophecy of sorts, if only because having people know about what I'm trying to do might keep me a little bit accountable.

Here's the plan. The gaming (which will be solo initially, expanding to include the children as time and circumstances permit) will be using Swords and Wizardry and Mythic GME. The writing will be to fill in the blanks in history and world setting or to expand on something fun or interesting that comes up in the games. I hope to have plenty of back-story to be able to do NaNo '10 using the setting and my NaNo/Twitter friend winnie3k has encouraged me to try to add a short story per quarter into the mix too.

Mythic Yahoo! group member blastedpsychic has produced a very clever Random Campaign Start Up Generator for Mythic which I have used. While I was planning to veto any rolls that really didn't appeal (what on earth is a 'Noir' theme anyway?) I managed to get a very interesting setting out of it. I've given it the working name of Bladesage (after the significant city state in the area) and I'm planning to expand on some of the details I rolled up as I go..

I have a basic history, a set of bad guys, a possible good guy/girl, some external influences, some internal movements, a couple of non-human races and a terrifying wandering monster. I hope to share some of these in my next couple of posts.